It is a common knowledge that Rita and Mal are real book worms. Since the early childhood (or at least as long as we can remember), we have been surrounded by books and greatly enjoyed reading. At one point during our teen days, we even have been members of 8 different libraries and read several books per week. Not much has changed, believe us. If we are not busy planning and scheming, painting, taking pictures and admiring the cats, you can find us sitting comfortably with a book in our hands.

Reading a book is one thing, but meeting the person who wrote it, is quite different. Being introduced to authors is a completely new experience for us, but we have to admit, it is absolutely delightful. In November 2011, we have met one of the best new British teen adult/fantasy writers, Helen Stringer and we had a real blast travelling all around Hereford with her. You can read the review of the meeting here: https://cocamidemea.wordpress.com/2012/04/27/a-day-with-helen-stringer

This year, we had a true pleasure of becoming acquainted with another bestselling author – Jasper Fforde, a real genius behind the Thursday Next novels and Nursery Crimes series. Mr Fforde visited the local library in Hereford to promote his newest books written especially for younger audience. His visit to the cathedral town was not accidental as the city plays a huge role in the Dragonslayer saga. If you want to know more, you need to read the books. You will laugh, cry and love every sentence written – just like we do! 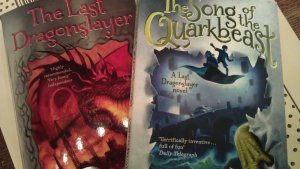 Two books released so far in the Dragonslayer trilogy

We have no idea what spells, charms or favours the library workers have called in to convince Mr Fforde to come, but the public was really ecstatic. Over 70 free ticket were issued for the meeting and they were gone within several days. Rita reserved her tickets a week in advance and she was one of the last people to do so. The author’s visit was a part of The National Libraries Day celebration and took place on Saturday, the 9th of February. The lecture started exactly at 2 o’clock and lasted for full two hours. Having a lot of time on our hands, we showed up an hour before the meeting was about to start. Thanks to this strategic move, we witnessed the author’s arrival with a big box filled with books and even took part in the photo session organized by the library. Being fashionably late works like magic, but the road to success is always to come early and leave last, remember about that! 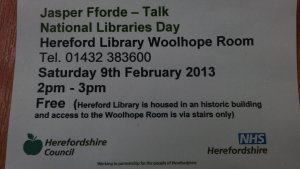 Ticket given to the audience befire the meeting

Mr Fforde didn’t lose any time and he quickly set up his stand in the historic Woolhope lecture room.  Once the impressive collection of books was displayed, he immediately started greeting and introducing himself to the public. It turned out that just handful of people have met him before, the majority only knew him from TV or by reading his books. One of the visitors named Noah (originally from Atlanta, Georgia!) travelled all the way to Hereford from London where he was studying. Mr Fforde spent a longer while talking to him, reminiscing his trip to USA the year before. Noah was given autographs on each of his books and also a set of unique postcards printed especially for The Dragon slayer saga premiere. 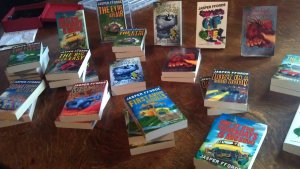 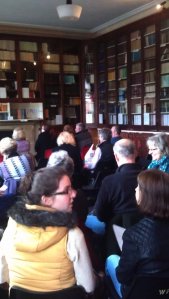 Public gathered in Woolhope Room just before the meeting

After the meet and greet, the time came for the meeting to begin. The author was invited to a small stage erected in the middle of the room and… There was a complete silence. No, Mr Fforde didn’t forget what he was about to say – the microphone refused to cooperate! Giving up on technology, the talk was done in a traditional way. Rita had to admit that Jasper Fforde is not only an excellent writer, but also a talented speaker. He quickly broke the ice (if you have ever spoken publicly, you know that the beginnings can be a real pain!), officially greeted the crowd again and made them laugh with personal stories and jokes. A bad speaker can turn two hour session into nightmare, but a skilled orator makes the time fly by quickly. Mr Fforde talked mostly about his training as a writer and his work in movie industry, his Polish roots (his grandfather Joseph Retinger was born and raised in Krakow) and extended family members. He confessed that his siblings chose a career in education and are very successful in that field. Each of them earned PhD degrees and it made the family life a bit harder (especially at official gatherings) as they are all now referred to as “Doctor Fforde”.

Jasper Foorde during the meeting

Jasper and the audience

The largest part of the discussion has been dedicated to Mr Fforde’s books. His novels have been rejected more than 70 times before his third manuscript entitled “The Eyre Affair” has been published to universal acclaim in 2001. However, before the success, nobody wanted to risk publishing a cross-genre piece incorporating elements of alternative history, fantasy, science fiction, murder mystery, satire and romance. Mr Fforde joked that his book could not be labelled as no previous author had ever written a similar thing and the publishers had no name for the newly created genre! This and other anecdotes revealed a very sad true state of the publishing world – being innovative or imaginative is generally looked down upon. Young writers have to knock on many doors before they are offered a chance to show their potential. Publishers prefer to take a good care of the well established authors as their novels are universally known and the risk of financial loss is minimal. On the other hand, nothing should discourage the writers from trying. Rejections are not pleasant, but in the long run, the persistence and belief in one’s ability will always pay off. When Mr Fforde asked the crowd, how many authors (published or not) attended the meeting, several hands were raised. He gave the hopeful writers a one good piece of advice – never give up; if you cannot find anybody willing to publish you, publish the book yourself!

Jasper Fforde signing book at the end of the meeting

If you have never read any of Jasper Fforde’s books, we recommend you start with the Dragonslayer saga. There are two books available on the market now (“The Last Dragonslayer” and “The Song of the Quarkbeast”), a third and final part will be released later this year under the title  “The return of Shandar”. We couldn’t help ourselves and we prepared a short summary of the saga. And it goes like this:

Despite her surname, Jennifer Strange is a true oasis of normality and logic in a world where magic is real, nothing looks as it seems, nothing works as it should and the people are utterly and hopelessly mad. When we meet her for the first time, Jenn is the 15 year old orphan and acting manager of Kazam – an employment agency for magicians, wizards, seers and other magical professionals. After the previous manager disappeared in shady circumstances, Jennifer not only takes care of the day-to-day activities of the agency, answers the phones or meets the guests at the reception. She is also a baby sitter to the large group of highly dysfunctional mages, psychologist, secretary, legal adviser (you have to fill out forms for every spell!), warden and chauffeur. That’s a lot of worries for one single lady, especially if the magic is weakening and the jobs are few. Economic woes or losing the council’s lucrative contract to magically clean city’s drains to somebody else are just the beginning. There is something else in the air and everybody can feel it. The last dragon is about to die at the hand of the dragon slayer and all the lands and riches will be available for grab. Journalists, press, sorcerers and general public are waiting impatiently for the race to start – the sooner you enter the famed Dragonlands, the richer you will become. And when the rumour spreads out that Jennifer is destined to kill the dragon, a real madness begins. But Miss Strange is not going to let the magic disappear for ever. With the help from her newest assistant, Tiger Prawns and a quarkbeast, she is going to use all her skills and intellect to save the day.

Don’t ask us to tell you what’s going to happen next. We have no mercy and we shall reveil no secret. Just remember, trust no men and no dragon and beware of the singing knight!

The Last Dragonslayer book has been released in 2010 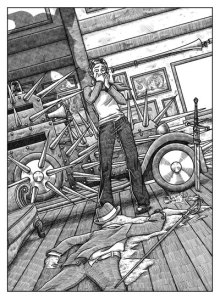 Jennifer Strange as seen in “The Last dragonslayer”

After the meeting, we spoke to Mr Fforde for several minutes about history and his travels to Poland. He was also very kind to sign our books and promised to wait patiently for the review to be published on the blog. We are sorry that it took us so long but 2013 is a bit hectic and our day jobs are quite demanding at the moment. Nonetheless, it was a great pleasure to meet him and we will definitely visit him again if he returns to Hereford. Rita would also like to thank Jon, Anne-Marie and all library workers for their hard work and great organization skills. Let it be said loud and clear, Hereford has the best libraries in the world! A tiny bit of local pride hasn’t killed anyone yet, right?

The author is watching you. You will read more and that’s is an order, soldier!

“Libraries gave us power
Then work came and made us free”

Have a great Easter Holiday weekend everybody!