Yesterday was a very busy day. The weather was beautiful and Rita decided to take three cats from our mom’s collection for a walk and photograph them in their “natural” environment. During the stroll, she stumbled upon a water football match on the River Wye, the opening of hART exhibition, made new friends and took a lot of pictures! The cat photo session lasted about 4 hours and she had to climb up and down the city walls to get the best results. Late night editing took two additional hours and now Rita needs to catch up on sleep. That’s the price you pay for the art!

If you haven’t read the first part of Kat-a-log, please click here to do so:
https://cocamidemea.wordpress.com/2012/08/27/the-cat-collector-or-kat-a-log-part-1/

In short, the titular cat collector is our mother, an artist and designer, Olympia Dabrowicz. A proud owner of two “real” cats named Salem and Michael (the second being a half persian black and white fluff of silliness), Olympia has always been mesmerized by cats: their ever-changing personalities, strange habits and gorgeous looks. No two cats are the same, a popular proverb says, and Olympia knows that better than anyone else. Her passion for purrs and paws led her to start an unique collection of felines from different cultures, countries and makers. A decade later, her house looks like a shrine dedicated to the cats and this is how the entire project was born. Yet, Kat-a-log is not a simple collection of pictures. Olympia would never be satisfied with it. She decided to take her kittens out and about and portray them as living creatures. They can be made from metal, porcelain, plastic or wood – but they come alive outside.

If you do not believe us, let the pictures do the talking! All shots were taken by Rita but were designed, supervised and selected by Olympia herself. There are three cats in this issue and each have been photographed three times. Three sides to every cat? You bet!

Kat-a-log Feline no.7
The three sides of a cat: Sitting on a fence, At the mason’s yard and Sunset at the Victoria Bridge.
Country of origin: UK.
Carved in wood by hand and decorated with colorful decoupage paper. The cat was bought on arts and crafts market in Hereford, from a local artist. August 2012.

Sitting on a fence

At the mason’s yard

Sunset at the Victoria Bridge

Kat-a-log Feline no.8
The three sides of a cat: Basking in the sun, The cat and the lion and Ivy hideaway.
Country of origin: Wales, UK.
Website: http://www.craftywithwelshcoal.co.uk

Hand carved and well-polished to receive a natural glow, the kitten is a unique piece in Olympia’s collection. It has been made from Welsh coal by acclaimed artist and sculptor Keith Price. This small figurine can be used as a pawn in the game of chess and is a part of the bigger set of cat-chess. Each figurine can be purchased separately or together with other pieces and the elaborately decorated coal board. It was given as a gift from Herefordian museum curator in July 2012.

Basking in the sun 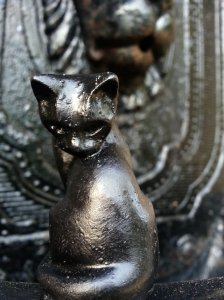 The cat and the lion

Kat-a-log Feline no.8
The three sides of a cat:  Posing with a flower, Waking up! and On a lazy day.
Country of origin: UK, The Juliana Collection, found in June 2012

This cat came into our mother possession in quite a peculiar way. It was lent to local library for an exhibition by one of the readers and they never came back to reclaim it. Poor feline spent several years in the cupboard among odds and ends and other strange bits until one of the workers remembered about it and gave it to Rita. At first, the cat was thought to be a vintage trinkets box from the 70’s, but after research online, Rita established that it is much newer – manufactured probably in late 90’s. It was made by Juliana Collection and came in this original box:

The cat is made from enameled metal with crystal finish and decorated with tiny gems on both sides. It opens up (it is a small box not a figurine) and you can hide your treasured possessions there. Despite looking all lovely and light, it is quite heavy. Once homeless, it was adopted into the Kat-a-log in June 2012.

Posing with a flower

On a lazy day

Make sure to come back soon, as the part three is almost ready!
We have many kats in our bags, you know!