Last week we have taken part in an event in Birkirkara organized by Friends of The Earth Malta on the occasion of Car Free Day. It was one of few events that were organized all over the Island and we have to admit it was pretty impressive. You have to know that this island has just 300 km square (and that’s divided between islands of Malta, Comino and Gozo with a sea channels in between) and the population here is over 500 000.

Annually, Maltahosts 2-3 millions of tourists. Density here is comparable with Hong Kong (or slightly bigger to be exact), most locals travel by cars.

In other words, it is a small, populated place yet highly visited due to its weather, beautiful landmarks (try to see Valletta and claim you don’t like it!) and food.

In such conditions to have a day without cars is a challenge, not to mention if you plan to organize an urban picnic in the main village square with kick boxing, segway rides and a whole rugby team.

Well, Friends of The Earth like challenges. They have been fighting high level adversaries (hunters, contractors, and other plagues) and they know how to do their job. That’s why the picnic was such a fun. 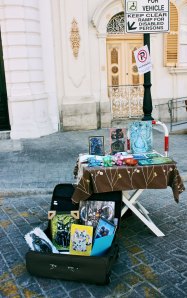 First and foremost we had a nice stand and a great company with Europa Donna Malta (a breast cancer support group) and CoreGreen EcoFood and EcoEvents among others.

In short description, we had attended a show of kick boxing group, we tried a ride on a segway (singing “White and Nerdy” – you know just like in Weird Al`s video), we played loud music (anything from Sabrina and Bananarama to Metallica!), ate home made food. Birkirkara Alligators joined the crew in the afternoon and organized games, competitions that looked easy but made your head spin for an hour 😉 (Kids don’t try to turn around 20 times with your head touching a broomstick!), they made a human pyramid and generally had the best time ever.

Photo by Mal, our friend Raissa under a BIG umbrella 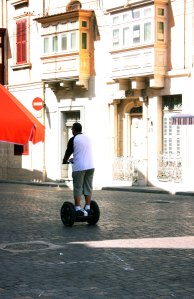 There were very little people coming to join us but those who came, had a great time. We got sunburned, had met some fantastic people and spent a whole day outside. Even if we didn’t sell anything, it wasn’t that important. After all there will be other occasions for it and Car Free Day was happening only once. 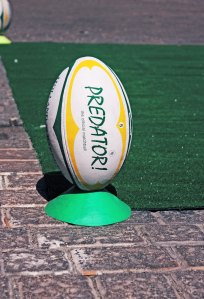 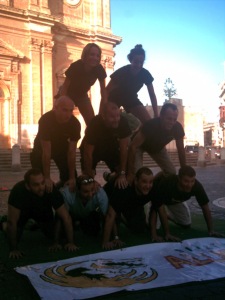 It’s worth noticing that there were other places doing the same thing and day later the biggest newspaper on the island The Times of Malta had a large article and a feature on the back about the whole idea of leaving you car in the garage even for a day. You can see the link HERE and scans are uploaded below. 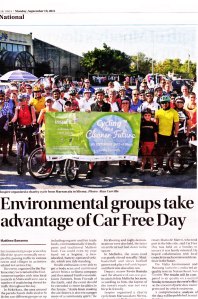 Thank you all that attended. Rita and I will be definitely coming back. It was the best picnic of the year!