Today is quite a special day. August 22 is a birthday of Layne Staley, the vocalist of Alice in Chains. Layne was a friend, though we have never met.  But his music helped us through some really hard periods:  high school and university struggle and our mom’s illness. We always intended to tell him how much his music meant to us but we have never managed.

On April 5th 2002 Layne had passed away losing a long battle against the addiction. We like to say that he returned to Olympus (as Andrew Wood once mentioned).

Layne had always been an inspiration to us and today we would like to share that inspiration a bit. Some years ago, Rita had come with a sketch of a manga character named Lain (from Serial Experiments Lain), who’s name sound exactly the same as Layne’s. Too strengthen the connection, Rita dressed the character in Alice in Chains t-shirt (with the sun emblem).

From my side, I decided to take a photo. Not just any photo. Recently I have bought a vintage Polaroid camera and I am teaching myself to take photos with it.  Since the film I have is having a blue/silver effect to it I am calling the photo I took ‘Way of Blue”. It is also a reference to the latest album by Alice in Chains –“Black gives way to blue”.

In my photos I reflect the urban side of life, and this photo is no exception. It is a wall of a old building with the cracks and paint peeling down.

But there is a lot of light in it, giving it some kind of reflection. It is still blues and blacks but every Polaroid has also a silver lining… 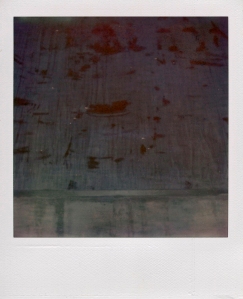 We would love to be in Seattle last night to attend Layne`s annual memorial concert. Since we are half the world away we decided to do some art and just send our love to the Emerald City.

Please enjoy the art and pass the love. We miss you Layne.