It is with the greatest of pleasures that we present you today’s review. For the first time ever, Indieterria is hosting a band from Poland! And they are, in our opinion, one of the best bands to come out of our native country in many years.

Trupa Trupa has been present on the international market since the release of their debut album in 2015. Musically, they are closer to Fugazi and experimental shoe gaze mixed with wild psychedelic rollercoaster. This year Trupa Trupa played Off Festival and SXSW where they received rave reviews from Chicago Tribune, NPR and Rolling Stone!

Official bio: Trupa Trupa are Grzegorz Kwiatkowski, Tomek Pawluczuk, Wojtek Juchniewicz and Rafal Wojczal. They made their first international appearance in 2015 with the album “Headache” published by a British label Blue Tapes and X-Ray Records. A year later, they signed to French Ici d’ailleurs, where they released a remastered version of “Headache” on vinyl. In 2017, in cooperation with their British and French labels, the band recorded and put out “Jolly New Songs”, which was also published by the Japanese label Moorworks. In recent years, Trupa Trupa have toured extensively, playing at the SXSW, Primavera Sound, Iceland Airwaves, Colours of Ostrava, Waves Vienna, Eurosonic, Liverpool Sound City, to name just a few. In February, 2019 the band released a single “Dream about” via Sub Pop Records. The new album “Of The Sun” will be international cooperation between Glitterbeat Records (Europe & elsewhere), Lovitt Records (USA), Moorworks (Japan) and Antena Krzyku (Poland). Release date: September 13th, 2019. The band works with Paradigm Talent Agency in North America, South America, Asia, & Australia and ATC Live for Europe, and will promote the new album with tours in the USA, Europe and Japan. 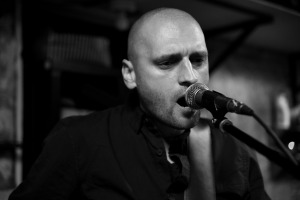 Their single “Remainder” is KEXP’s song of the day and received a solid airplay on BBC through Stuart Maconie, Gideon Cole and Tom Ravenscroft. The band has been mentioned or interviewed in Rolling Stone Magazine, Pitchfork, Wire Magazine, Clash Magazine and many others.

We have sat down with Grzesiek Kwiatkowski, the singer and guitarist of the band to speak about the new song, his fear of people and why discussing history is so important in times of social divide.

Please introduce yourself to the readers of Indieterria.

Where are you based and who is in the band?

Grzegorz Kwiatkowski: Trupa Trupa is based in Gdańsk, in the north of Poland. Except for myself, the band consists of Rafał Wojczal (guitar/keyboards), Tomek Pawluczuk (drums) and Wojtek Juchniewicz (bass guitar, guitar and vocals).

Tell us something about your new single “Remainder”? Is there any story behind it?

Grzegorz Kwiatkowski: Everything we do can be interpreted in many different ways that’s why there isn’t a single story behind this song. Wojtek wrote the lyrics so his interpretation of “Remainder”, his idea behind this track, is not the same as mine. I’m not even sure if I truly understand what inspired him to write it. I can only tell you what it means to me personally. And I think, when people start listening to the song, they realize it is a protest against denial, against conveniently forgetting about things that happened in the past. It is a song about Shoah (Holocaust), about human catastrophe. 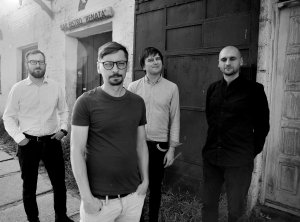 Where did you record the song? Was it in your home town of Gdansk (Poland) or somewhere else?

Grzegorz Kwiatkowski: The song was recorded, along with our entire album “Of The Sun”, in Custom 34 recording studio in Gdansk.

The song comes with a black and white video that looks like it was filmed through a telescope. Can you tell us where it was shot and who directed it?

Grzegorz Kwiatkowski: The video to “Remainder” was directed by Nick Larson but Aleksander Makowski helped him a lot on the set so it’s rather a cooperation between the two of them. I have discussed the meaning of the song with them before the shoot and they seem to agree with my interpretation. The video too tells the story of a humanitarian disaster.

Are you touring? Where can we see you playing live?

Grzegorz Kwiatkowski: Yes. We work with ATC Live and Paradigm Talent Agency so we are really in great hands when it comes to touring. This fall, we will play in America, Great Britain, France, Switzerland, Denmark, the Netherlands and Poland. So far, we have booked four shows in the UK: in London (Sebright Arms on 27th of September), Brighton (The Hope & Ruin on 2nd of December), Glasgow (The Hug and Pint on 4th of  December) and Leeds (Hyde Park Book Club on 5th of December).

Your new album “Of The Sun” will be released in September through Glitterbeat Records (Europe & elsewhere), Lovitt Records (USA), Moorworks (Japan) and Antena Krzyku (Poland). What can we expect on the record?

Grzegorz Kwiatkowski: Each song we put on the album is open to individual interpretation. For me, the record feels like a “Samuel Becket Lonely Hearts Club Band”. It is about time and nothingness. It deals with social issues on “Remainder”. And it is important to talk about these things. You see, few month ago, we wouldn’t be speaking about politics, but the mayor of Gdansk, Pawel Adamowicz, was murdered by a person radicalized by a right-wing hate speech. It was a huge shock for the entire country but it particularly strongly affected us. Gdansk is a city of freedom, (this is where the Solidarity movement started – Vandian Avenue), so the shock was even bigger. The band is now more aware of how the world around us has changed in the last couple of years, how bad it really became. We almost felt the history knocking on the door of our rehearsal room. I dedicated our SXSW shows to our murdered president.

I have always been rather afraid of people so that hasn’t changed. But now I realize, we live in a crazy, fucked-up Brexit-Trump times. Our reality has always been cruel and a lot has been done to cover up the brutality and violence. In the past however, people were more pretending, they wore masks. They were hiding their intentions. And suddenly, they feel empowered to say whatever they want. They do things in the most egoistic ways. Not all of them, but many do. They dont care about others. I feel this is a very risky situation. Evil can spread around faster than ever.

“Of The Sun”, Trupa Trupa’s new album will be released in September and we will be reviewing it as soon as it gets into our hands.
You can preorder your copy now fom Bandcamp:
https://trupatrupa.bandcamp.com/album/of-the-sun

The band is also working hard at adding new dates to their UK tour so keep your eyes open for possible gigs in Manchester, Liverpool, Bristol and Birmingham!
We would like to thank Steve Hampson for his beautiful pictures taken during band’s rehearsal in Gdansk in July.