Birmingham/West Mids scene at times feels like uncharted territory. You may be an active player locally for years and still come across bands that you have not heard of before. And they usually will be bands that you dig immediately, from the first listen. Let`s take Mutes for example. One evening, on our way home we noticed a poster advertising a gig in the local venue in Worcester.  We checked the headliner to realise not only they were part of the West Mids scene but we had like a million mutual friends and hanged out at the same boozers and venues between Madlands and Mancunia (hello Sunny and Castle!) Mutes were noisy, unpredictable and fiercely independent. The same evening we sent them a message and asked for an interview. There was no time to be wasted. Below, you will find our conversation with vocalist James Brown and Tom Hewson – bassist and founder of FOMA records. It is a long, splendid read but that`s how we like our music – loud, untamed with artists having something important to say.

Official bio: After two long, domesticated years of breakups, job losses, uprooting and rebuilding, Mutes have returned with their reactionary, tempestuous sophomore LP “Pareidolia”– a meandering, exhilarating record that sees the Birmingham post-punk group delivering something entirely new. Mutes have continued to build up a national reputation supporting bands such as Sorry, No Age, Cloud Nothings, The Cribs, PINS, Menace Beach & more. The group have received a steady stream of acclaim for their recorded output and live shows since 2014.

The Mutes ready to take their new material on the road. Photo by Megan Lewis

DIY Magazine described you with these words: “Mutes occupy the kind of territory that heavyweights tend to own”. Please introduce yourselves to the readers of Indieterria.

James Brown: So we’re Mutes- a 3 piece band from Birmingham. Started as a solo lo-fi project for myself but has ballooned into something far more aggy and ferocious. We’re into noise rock, ambient music, math, chamber pop, garage punk… everything really. Our music is kind of arty punk I think. It’s ephemeral in a sense but it’s also a lot more drawn-out than most of our local contemporaries.

Mutes have been on Birmingham scene for a relatively long period and have impressive back catalogue, maybe even the richest on local scene.  Your debut, self titled EP came in May 2014. It was followed by “Starvation Age”, a full band release on One Note Forever Records in 2015. You also have  an LP  – “No Desire” – that came out in 2017 via FOMA Records. That’s a lot of material. James also has three solo EPs to his name:  “Various Distractions” (2013), “No One Is Nowhere” (2014) and “Inertia” (2016). Its seems like you have this urge to record at any time. And even at any place – judging from the fact that your albums have been recorded in a bedroom in Birmingham and  a basement in Leeds. 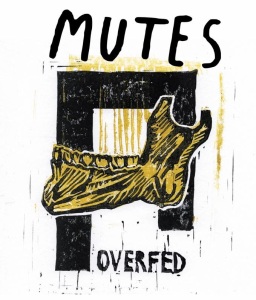 James Brown:  We’re actually nowhere near as prolific as I’d like to be. It’s hard in this day and age- if you release stuff constantly it just gets lost in the ether. Ideally I’d love to release at least 2 EPs a year and an album every other. But it’s hard to maintain prolificacy when you have a full time job! Above and all music should be self-expression and playing in a band should be fun- there’s no point writing a song if you have no feeling or aesthetic bursting to escape. There’s more than enough songs in the world. We record anywhere we can due to budget constraints- I recorded and mixed “Pareidolia” myself because I knew I had to make the album but I had no money at all. And I’m glad- necessity is the mother of invention and there’s things I did that I could’ve never done on someone else’s clock.

Press release for your new records mentions “breakups, job losses, uprooting and rebuilding”. This struggle must have left its mark on the album. Would you be feeling comfortable to tell what have happened in the band in the last two years?

James Brown:  Well over the last 2 years Mutes have had 8 different members. And I’ve had 2 relationships, 3 jobs, lived in 2 cities. You get the picture. It’s not been a particularly stable existence, but for better or worse having music to keep me going has been imperative to not just jacking everything in. Because when you’re onstage, or laying down vocals, or in a sweaty, smokey rehearsal room and everything clicks – none of the other bullshit matters. I wrote out all the lyrics to “Pareidolia” the other day and they do really reflect everything I’ve gone through over the past couple of years- relationship breakdowns, identity crisis, substance abuse or whatever. Even if I was too mired in it at the time to realise that’s what I was writing about.

New LP is entitled “Pareidolia” and comes out on June 21st 2019. So far three singles have been released: “Swallowing Light”, “Overfed” and “Men of Violence”.  The album brings a brand new line up. How do you think the record will be received?

James Brown:   I honestly don’t know – all I can do is be grateful that anyone might spend their own time listening to it. That blows my mind, the idea that someone might choose to listen to something I’ve created. But if they do that and it elicits any kind of emotional response then that’s incredible and I am thankful.

You remain unsigned but release your material through FOMA that also have Hoopla Blue, Outlander and Repeat of Last Week on their roster. The label also organizes events and offers artists management in house. Can you tell us more about FOMA and the relationship you share?

James Brown:  I’ll pass this over to our beautiful boi Tom

Tom Hewson: I formed FOMA with my brother James Hewson and friend Adam Tomes, who I write music with in Hoopla Blue. We started working with Mutes before the release of their debut LP “No Desire”, which was exciting for us as a label as it was the first time we worked with a band we were not directly involved with. Since then we’ve also worked with Outlander. James self-produced “Pareidolia” before I joined the band on bass duties. The label has become somewhat of a family that share the same values and commitment to our city and the music it offers. It’s all an experiment to be honest. We want to shout about the beauty of Birmingham with each new release and event

Mutes will be going on tour to support the record. Where can we see you live?

James Brown:  Cardiff, Nottingham, Birmingham, Worcester, London, Shropshire, Manchester. It’s pretty drawn out and we’d have loved some more dates up North but we get where we can! I’ve had to book out some of the venues myself so it’s DIY to the bone. I love day trips and playing a gig is like a day trip but with you as the star! And free beer! I mean what’s not to love?

We always get excited when bands come to play in our city of Worcester. For this particular gig you will be supported by SedatedSociety – a project by members of Rubella Moon, Coat of Many, The Americas and Junior Weeb.  That is truly mind blowing! Anything we should be expecting from the performance?

James Brown:  It’ll be loud! I’ve always loved Worcester and have been lucky enough to become friends with some of the bands there – and ones that have flown the nest such as Souer. I absolutely LOVE playing small intimate venues, so I’m really excited to play Paradiddles. Asking SedatedSociety was a given- those guys have been to a couple of our shows and are great, and I like to hand pick line-ups any chance I get. If one person who has never seen us play before has a good night then it’s a success. I have literally played to just the bar staff before and if they’ve enjoyed it then I’m happy. Maybe we can all hit Heroes after and drink too much. I like the low ceiling in there, makes me feel less like a short-ass.

Mutes will tour in support of their new album

Last question: We all say that Birmingham scene is underfunded and not as competitive as Manchester or Liverpool for example. So, if you had a million pounds to throw at the Birmingham music scene – what would you change?  What would you improve?

James Brown:  A million pounds eh? Well, open a new venue- one that’s around 80 cap and has accommodation for touring bands. Put the money into ensuring all bands that play there get some kind of content-based benefit such as a decent quality recording of the set, possibly even filmed too. Maintain a blog that does video interviews. Ensure it’s a safe space for everyone who wants to attend. Keep the toilets clean and the drinks reasonably priced. I love the East Midlands scene – Nottingham, Leicester, Derby. They feel a lot more sincere and less flashy. Dubrek Studios & JT Soar are great examples – Outta Mind Promotions put on a fantastic all-dayer last month and I could play those things every weekend for the rest of my life and be happy. Any money left over I’d love to put into obtaining press and tour support for FOMA artists. You’re really making me want a million pounds now! 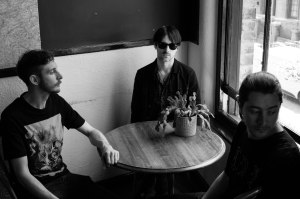 Some additional reading about Mutes:

Poster for Mutes/SedatedSociety gig in Worcester

Mutes will play Worcester on June 25th 2019 at Paradiddles with SedatedSociety supporting. This will be first gig for both bands in town and the venue is very intimate so grab your tickets at the link below: