Stand in line, straighten up, no lollygagging! This is your captain speaking. Welcome to another edition of “One castle a Day” and we can tell you straight away: we are hundreds of miles away from any castles today! Real soldiers and vagabonds like us are not interested in artsy-fartsy ruins or anything as simple as sightseeing. When we go out, we like to work hard and play hard.

Combat boots on, brothers and sisters in arms! There will be a lot of climbing and those of you dear readers who find little or no pleasure in wild beauty or trekking, can skip this entry altogether. We are hijacking the blog (just for a little bit) to take the brave ones into the wilderness that inspired excellent books like Lord of the Rings and Chronicles of Narnia! 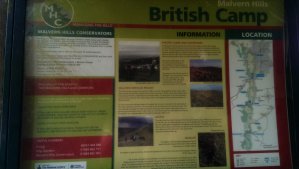 Your intuition is correct – we are off the see the Malvern Hills, one of the biggest tourist attractions in West Midlands. The Hills are known far and wide and are strategically located in the heart of the Three Counties: Gloucestershire, Herefordshire, and Worcestershire.

Look below, our military intelligence prepared a short  useful report about our destination. A bit of statistics always comes in handy :

Beautiful view from the top on Herefordshire and Worcestershire

Malvern Hills raw, untamed beauty can literally heal body and soul. Running up and down the green gables is a great exercise and your mind can finally rest as well. No telephone calls (the reception is poorly), no shouting bosses, no emails or laptops (unless you take it with you). Clear, fresh air, cold wind and wide open space everywhere you go. Locals say that Malvern Hills are magical – human race has been living here since the prehistoric times worshiping the powers of nature and pagan gods on the hilltops. Wild animals can be seen roaming the valleys and endangered birds are nesting despite millions of tourists coming here each year. The legend says that the Hills are indestructible – they have been created at the beginning of time and will last until the time itself runs out. They offer comfort and peace for those who look for it. All you need to do is to sit down, close your eyes and listen. In few minutes you will find yourself in a completely different universe. It is truly amazing what can you hear: wind whistling among the rocks, buzzing of the bees, skylark singing, strange whistles made by buzzards and distant echoes of laughter and talking. But there is more: concentrate harder and you will realize that birds of prey are floating nearby and their wings slash the air like arrows, rare High Brown Fritillary Butterflies are dancing above the ground and a family of dormice is just starting to eat their lunch. And in the background, the most soothing music of the Hills can be heard – the gently singing of a mountain stream. 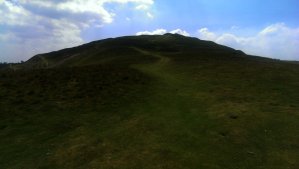 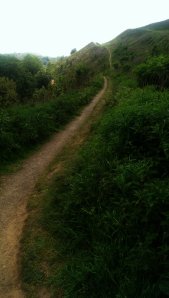 And yet another road

Tiny brooks made of rain and snow-melt water flowing lazily among the rocks are crystal clear. They are said to have healing properties and several miraculous springs are in constant use since the middle ages. Great Malvern has been a spa resort since the 17th century and even today people are coming here to recover after hospital stays or prolonged illnesses. We have seen lots of tourists on wheelchairs, walking with canes or slowly climbing supported by their partners or relatives. It’s really uplifting seeing them trying so hard to get back to health – that’s the spirit we say! Nothing comes easy but climbing the hill is incredibly rewarding. Kudos to everyone that tries!

Did you know that royal family has been drinking Malvern Hills bottled water for few decades now and Queen Elizabeth doesn’t go abroad without a large supply? This is not an urban legend or a patriotic tale repeated by Malvern based tourist guides. Local holy wells built around 14th century have been thoroughly tested and the analysis will amaze you. The water is filtered by Precambrian igneous and metamorphic rock, one of the oldest in the entire United Kingdom. The rocks are estimated to be 670 million years old and are extremely hard. Water drops are perfectly filtered by large cracks in the stone cleared of any impurities and dirt but at the same time, they are unable to do any damage to the stone! Water has been penetrating the rocks for millions of years and yet the scientists can find none or very little minerals in it. We are sure you are familiar with the ever famous saying by Ovid that simple drop of water can dissolve mountains. It is a scientifically proven fact, yet Malvern Hills seems to be an exception to this rule. A true miracle of nature and so close to us!

Tourists resting on the trail 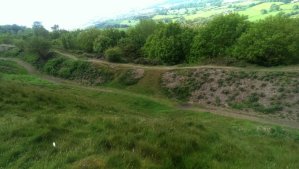 Bottled water from Malvern Hills can be purchased in hotels, shops in the city centre and on trails. Thirsty travellers are usually stopping at St. Anne’s Well, a popular café that offers good food and nice selection of ice creams and refreshing drinks. Another attraction of the café is a natural spring located in a small separate building on the right hand side from the main entrance. The water sprouts into tiny basin and visitors are able to drink straight from it. Please try not to make a mess when you are using the spring. We have seen several jokers that thought it would be funny to throw food or their dogs into the spring. Malvern Hills are protected by law and you will be quickly removed in case of any trouble. The whole area is designated as a Biological and Geological Site of Special Scientific Interest and as National Character Area 103 by Natural England. It was also recently named as Area of Outstanding Natural Beauty and any antisocial behavior will be severely punished. A special reminder from Malvern Hills Conservators we were asked to pass: don’t leave the trails and wander through the hills on your own. Walking paths, stairs and trails have been created to make the visit smooth, easy and safe. Going off road is not prohibited but can be fatal for many protected species of fauna and flora. Just one step in your heavy boots can crush rare plants (bracken, gorse, harebell or a black poplar) or kill great crested newts or adders that live on the hillsides. Malvern Hills is a nature reserve with acid grasslands, mixed broad-leaved, semi-natural and ancient natural woodlands so treat it with respect. Smoking and littering can earn you a 3B’s (big boot to the backside) – you have been warned!

The beauty of the hills can melt even the hardest heart of a soldier but this is not why we are here today. Our interest lies on the very top of Herefordshire Beacon Hill. This is where an ancient hill fort has been located. Historians do not know the real name of the fort but the Iron Age settlement is commonly known as the British Camp. The unusual name has been coined in 1879 during major excavation works led by F G Hilton Price when the archeologist tried to distinguish this particular structure from other forts in the region that were constructed by Romans. It is believed that the large settlement (around 120 wooden huts encircling large castle-like building) has been created  more than 3,500 years ago by native British or Celtic tribes.  Legends say that the fort has been attacked numerous times and survived intact until around 48-43 AD when it was probably burned down along with other forts  at Midsummer Hill, Bredon Hill and Croft Ambrey near Leomister and subsequently abandoned. According to folklore, British Camp was an important strategic point against the Romans and it was defended by famous chieftain Caratacus, prince of Catuvellauni tribe from South-Eastern part of Britain. After losing the battle, Caratacus has been taken to Roma as a prisoner and was to be killed after the triumphal parade. However,  he was allowed to address the Roman Senate before his execution as a token of respect for his bravery and fighting skills.  His speech given in front of  Emperor Claudius made such a big impression on everybody that Caratacus was not only pardoned but also received full civil rights and a house in the capitol! Truth or not, he spent his remaining days in Rome and passed away sometime after year 50 AD. His name is mentioned by several credible Roman historians so we can be sure that he lived peacefully and was held in great esteem. 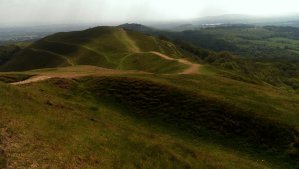 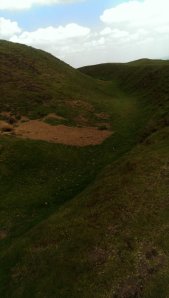 One of the deepest ditches found during our trek

British Camp during its heyday looked like a big wedding cake with multiple layers. Extensive earthworks forever changed the entire hill and even today we can easily identify where certain buildings or defensive structures were located. Deep ditches  were dug especially to hold tall palisade or a stake wall (up to four meters tall), narrow passages led to four city gates and living quarters were spread evenly around the rampart built on the top of the hill. Round huts had no chimneys but could accommodate extended three generation family. The rest of village grounds were used for farming and animal grazing. As you can see soldiers, British camp was self sufficient and could withstand not only prolonged occupation but also harsh weather and famine.  Archeologists haven’t found any temples or places of worship inside the fort, but religion was an important part of  everyday life and it is almost impossible for such a large, permanent settlement not to have a designated place for praying.  Some theories mention that  celebrations and rituals could take place on a main square in front of the rampart, but we have no evidence to support it. We don’t know how many people lived in and outside of British Camp, but the number could be as high as 4000. Very impressive indeed! 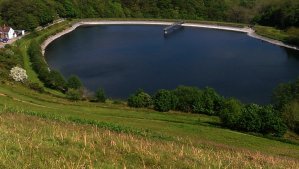 Water reservoir near Little Malvern Priory – we haven’t been there yet, but we are returning for sure!

Now, we promised not to mention any castles, but we are forced to eat our own words. In 10th century, Harold Godwison, the last Anglo-Saxon king in England constructed a small bailey castle within the fort, using its location and remaining walls  as additional protection. The castle didn’t survive  to this day but you can clearly see the foundations on aerial and satellite photographs.  It was probably erected at least ten years before the Battle of Hastings and was known locally as Colwall Castle. Harold died at Hastings and the castle was passed from hands to hands, finally being given to Waleran de Beaumont, Count of Meulan and 1st Earl of Worcester sometime around 1130. Waleran and his twin brother Robert de Beaumont, 2nd Earl of Leicester, re-modernized the building in early 1150 adding new walls and guarding towers. Sadly the castle was burned down by Henry II just five years later and was never renewed.  It is a bit of a shame as Malvern Hills could benefit further from having yet another landmark worth seeing.

British camp, Iron age earthworks and a beautiful scenery are not the only attractions that each tourist should see with their own eyes. There are plenty of  interesting places that we haven’t discovered yet and that’s why, another expedition was called for. Our next trip will take us to Gullet Quarry, Little Malvern Priory, Wynds Points, Pink Cottage and The Giant’s Cave! Soldiers just cannot wait!

Till our next time!
Stay safe and come back again shortly.