Don’t be cancelling 2020 yet. It may be a year of no festivals, virtual gigs and staying indoors but the art it produces is jaw dropping. Actually, it is a heavy weight year for creativity. Knock out after knock out from every corner – with no breather.  Just look at March alone. Two weeks passed from the release of False Heads` album (record of the year most likely) and we have a new single from Saytr Play, 20 dates autumn tour from Hands Off Gretel  and a much anticipated debut from The Red Stains on the cards.

If that wasn’t enough to make us at Vanadian Avenue sleep deprived  – an unexpected EP from Manchester duo The Dirt appeared in our inbox this morning. And we just had to squeeze it into the schedule because otherwise it would be a serious breach of Directive #1

Sachiko Wakizaka and Jack Horner aka The Dirt

What`s Directive #1 you ask? In short terms – what Manchester does today, the rest of the country does tomorrow. And if you ignore it, then you prove yourself to be a pompous wannabe with no real knowledge of pop culture.

If you don’t know The Dirt, don’t worry. Until about 11 AM today we had no clue either. But once they appeared on our radar, we quickly did the catching up.

The band succeeded in creating a record that can stand next to releases of Mr Bungle or The Legendary Pink Dots without feeling ashamed. If you take each track separately, they almost feel like punk songs – all below three minutes. The longest – most angry track on the album  – “Wiccan Transition” stands at 5 minutes and could easily find itself among Sonic Youth`s deep cuts.

You can take “No More Moves” as one long composition – a sonic meditation on human nature and its dark sides.

Everything on the EP is dirty, grungy and heavy. Even the logo – the band uses a kanji sign 泥 (pronounced “doro”) as its calling card. It roughly translates into “the dirt” but may mean “mud”, “mire” and “ooze” and we have to applaud them for putting a lot of thought into the vision and then trying to obscure it. You have to dig though the layers of sounds, language and symbols to truly appreciate the work Sachiko Wakizaka and Jack Horner did. You have to unearth it so to speak.

The Dirt created a very experimental,  noise, avant-garde record that nobody saw coming. They appeared out of nowhere with artistic vision, DIY ethos, rebellious spirit to mix beat poetry with psychedelic sounds and reminded everyone that the underground scene in Manchester is healthy and potent.

It would be an excellent idea to incorporate them into future Louder Than Words festivals. This duo has a lot to offer to the public.

We have spoken briefly to Jack Horner about the EP to go along this review. This is what he had to say: 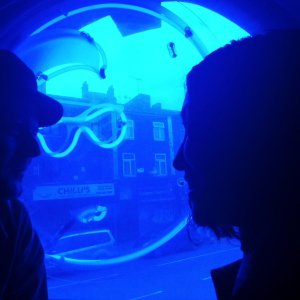 The Dirt looking out into the psychedelic future

How long did it take to record the EP and where did you do it?

Jack Horner:  We did it over  a few weeks, trying not to spend much time on each track. We wanted it raw and quick takes. We recorded at my house. Proper DIY feel. Did the guitars first, then laid my words on.

So it was just you and Sachiko Wakizaka working together?

Jack Horner:   Yes. Full on partnership. It works well. We seem to have a good collaboration and creative system. Probably we will go live in autumn. I’ll keep Leon ticking along too.

You wanted to explore something outside poetry?

Jack Horner:  I used words and verses that don’t feel right on my solo spoken word set.  They may be too heavy, too dark or just not suited. But I think the guitars work compliments them.

We really like Wiccan Transition. It`s the longest track on the EP. You could nearly call it a leading single.

Any story behind that track?

Jack Horner:  I went to see a spiritual healer. Crystal Therapy. I went into a crazy trance. It’s that and coming out the other side of depression!

I`m not sure which song  to put out as a single if we do.

So really The Dirt is a project to help you deal with mental health as well as creative process.

Jack Horner:  That’s how Leon The Pig Farmer started as well. Writing thoughts after a breakdown and stuff last year.  Then taking words to the stage. This is an experiment to take it elsewhere…who knows where.

That’s the beauty of my life now. I don’t set goals, plans or directions to get anxious about. It seems to work!

You can follow Jack Horner/ The Dirt on the socials:

It will be a very interesting experience to see the duo live in concert and we are hoping that we will have a chance to do so. If we do, please expect a full set video and a ton of pictures. And a word of advice. Do not underestimate the underground. You have no idea what lurks in one of those narrow streets behind AATMA…

Just a small update to let everyone know that The Dirt published their third visual trailer announcing new material coming in the next months. It showcases the band`s interest in Manchester`s creative Northern Quarter and signals a more refined musical landscape – with the use of drum machines and beats. We knew The Dirt was unique project on Mancunian music scene but the rate it grows and changes is just stunning! Our hats are off to Sachiko Wakizaka and Jack Horner for being absolute proper legends.