Welcome to our the newest chapter of Indieterria. In this edition of our blog we are hosting an act from London that is recognized as one of the brightest stars on the indie circuit in the capital – Dirty Orange. The band comes to Birmingham to play The Victoria on September 28th 2018 as part of their national tour. They will bring three established acts with them: Whitelight, ANOA and Dead Dad`s Club.

If you’d like to learn more about other acts, please see our other blogs:

We sat down with Dirty Orange to discuss their musical influences, their beginnings and the London music circuit. Hold onto your chairs and read on:

Official bio: Dirty Orange are a four-piece rock band from South West London building a reputation for “in your face, powerful, dance along” live shows. The band released debut EP ‘X.X.X’ in 2017 which has been described as “having that jolting early Arctic Monkey’s sound” by music scene influencers GetIntoThis. The band are touted as ones to watch in 2018 by Jack Rocks & Some Might Say among others

One of the privileges of being a music journalist is that you can interview bands with rare or very unique names. Dirty Orange seems to fall into the “very unique” name category. Quick research helped us to find a bottle of French perfumes called Dirty Orange, an Australian vegan café and a definition from The Urban Dictionary saying that Dirty Orange “can relate to either alluring fragrance with a hint of danger or someone with sweet disposition that displays violent or foul character traits”. What exactly is Dirty Orange according to you guys?

Dirty Orange: That’s brilliant about the French perfume and vegan cafe. But the name came about quite simply because George (vocals and guitar) and Connor (drums) look dirty and Scott (bass) has orange hair ! 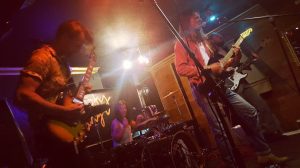 Live shows are said to be a high energy experiences

Your sound has been described as a perfectly balanced diet of Arctic Monkeys, The Clash, Nirvana and The Libertines. Do you agree with such classification?

Dirty Orange: (laughing) Yeah this list is a huge compliment as those bands are all massive influences on the music we write, but also there are some heavier rock influences on our sound from Motörhead to AC/DC.

You come from South London that is being described as the busiest part of the capital. How do you remember growing up there? Did having an easy access to cultural and artistic events helped you to reach the decision to pursue musical career?

Dirty Orange: Definitely! Growing up with such easy access to central London and famous music venues as well as art galleries has inspired us to pursue and write our music.

Every band started somewhere: at school, at a party, at football practice. Tell us more about your beginning as a group. Where did you meet and when did you know that you wanted to play together?

Dirty Orange: To cut a long story short, Connor, George and Scott all met doing this random summer job at a rugby club in Twickenham packaging season tickets when we were 17. We all got on so well. Connor played in a band at the time, Scott and George were into music but didn’t play. They decided to pick up their instruments a few years later and we bumped into each other on a night out where we decide to start this band and went from there. Fast forward a few years and we decided, we wanted to thicken our live sound by bringing in Beno (guitarist) who Connor went to school with so we managed to convince him up to come shred with us. Simple! 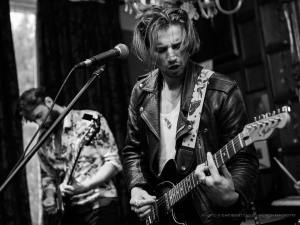 Your newest single is entitled “Hellraiser” and has been called an anthem for the young generation.  It has a very crisp sound and it is skilfully produced. Where did you record it and who is the producer?

Dirty Orange: “Hellraiser” is a massive track and a massive step up in production and fine detail for us. We were luckily enough to work with Wolsey White who has number one albums to his names and plenty of top 10 singles. We recorded the record in various different studios, all with Wolsey of course.

You have been working really hard this summer. You had some sort of a residency at Dingwalls Camden in London with several shows, you played Shindignation Festival, Red Light Sessions at August Bank Holiday Festival, Tramlines Fringe Festival, Hazfest in Kingstone, Venture Festival in Nottingham, The Great Escape Festival in Brighton and several others. And now you are back on the road again. Where do you take your strength from?  Loads of beauty sleep?

Dirty Orange: (laughing loudly) True, it has been a busy summer for us, but we never get tired from playing as it’s what we all love doing in life! We guess, we all have that extra push and energy to be playing, rehearsing and writing as much as possible! We also bounce off each other’s positivity in the band so it’s important we all have a positive mind set before every show/studio session/etc. 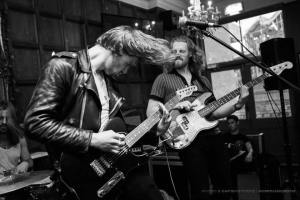 On September 28th you will perform in Birmingham with Dead Dad`s Club, Anoa and Whitelight. Are you planning something special for your West Midlands fans?

Dirty Orange: Oh yeah, it is going to be a massive night! It’ll be our first time playing in Birmingham so we can’t wait to see what the music scene is about and show what we got! So will be a special night!

What’s next for the Dirty Orange after the autumn tour? Are you planning to take a well deserved rest or is it back straight to the studio?

Dirty Orange: After the tour we will be taking a few weeks out as Connor is in Nashville doing some serious Dirty Orange networking! As soon as he’s back mid October, we will be writing rehearsing and gigging again. We already have November 30th planned at the Fighting Cocks in Kingston, plus 10th November in Staines with a local band that are good pals of ours. 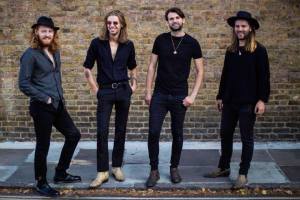 Last but very important question – if you could support any band active at this moment , whom would you choose and why?

Dirty Orange: Oooooh good question. Any band? That’s a tough question to answer so we will pick one each. For George, it would be Kings of Leon, for Scott it would be Arctic Monkeys, for Beno – Blink 182 and for Connor – Foo Fighters.

We hope that you enjoyed this interview and we will be reporting back from the gig.