After squeezing an un scheduled review of Saytr Play’s new single (“Second Hand Emotion”) earlier this week, we thought that nothing new will interrupt the carefully planned flow of our blog for September. And then we realized that we haven’t covered another super important release that came out almost at the same time as Saytr Play.

The other single is “El Dorado” by Avalanche Party. The song made such a strong impression on both of us, that it would be a crime not to write about it on Indieterria.  So we pushed all other reviews and intereviews a bit to make room for this very unique song. Was it worth it? Please read on. 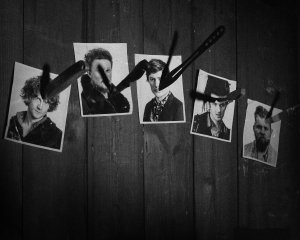 Released on August 28th, “El Dorado” is the second single after “7” that is promoting Avalanche Party’s upcoming debut album. And while “7” was 2 minute cacophony of  noise, “El Dorado” is nearly 6 minute long experimental ballad with piano and harmonica. At first listen, it seems so different from anything the band has done so far that many listeners voiced their concerns that it was risky to chose this particular track as a single. However, if you keep on listening, it quickly becomes clear that “El Dorado” is simply a logical progression of the band’s musical development. Yes, it is different than previous material, but the band’s unique sound is still there. What’s more important, the new recording is bolder, more ambitious and mature. And we like it a lot.

The songs starts with a semi intro of harmonica and few chords of a piano. It reminds us of “Arizona Bay” by Soul Savers (from their excellent 2003 album “It’s Not How Far You Fall, It’s The Way You Land”). The tempo picks up around one minute mark, the piano becomes stronger, yet the composition remains slow and fluid until its end. It certainly has a western feel to it, maybe inspired by the band’s travels to Texas earlier this year for SXSW. There is a lot of Tom Waits and Johnny Cash influences in this tune as well. And Mark Lanegan, especially from the “Whiskey for the Holy Ghost” era. Other reviewers compared it to the original “Kingdom of Rain” which is an excellent comparison as it brings us again to the Soul Savers who worked closely with Lanegan on “It’s Not How You Fall” (and who did the rendition of “Kingdom of Rain” as well). The dramatic sforzando and dissonant harmonies offers another musical connection, this time to the works of Ólafur Arnalds. Italian music blog “Indie For Bunnies” wrote that “El Dorado” could perfectly fit a movie soundtrack: either a western, or a crime drama and it’s hard to argue with their opinion. Lead singer, Jordan Bell has always been a skilled vocalist, but what he does with his voice on this track is a masterpiece. He takes the listener on a rollercoaster of emotions: from a whisper to nearly a scream, from falsetto to poetic declamation, from serenity to a hidden fury. We cannot wait what Jordan and the band will come up on their debut album!

“El Dorado” comes with one of the simplest and the most beautiful videos we have seen in a really long time. It is shot in black and white, with subtitles in yellow at the bottom of the screen. It makes you think of an old cowboy movies from 40’s and 50’s. A lone man wearing western clothing and what seems like a Hackberry Stetson hat on his head is seen walking through an open plain. The skies are heavy and grey, there is not a single soul around him, yet he is stubbornly hiking towards an unknown destination. We know absolutely nothing about the lone hero: what is he looking for, where is he, what happened to him that set him on his journey? Those rhetorical questions are adding to the overall mystery. The simplicity of the video allows the viewer to concentrate on the music, harmonies and the lyrics. And that makes it into a truly goose bumps inducing experience. You cannot take your eyes off it, there is some sense of incoming danger but nothing drastic is happening. The man is just walking and walking, stopping from time to time to take a look around and that’s all. You are left wondering what is going to happen next. Will his story be explained? Continued with another single?

The lyrics to the song are as mysterious as the video itself. Brutal and sentimental, full of longing, poetry and tenderness. They tell a story of suffering, mental anguish, love and loss, while not giving many details away. The band has an obvious love for highly visualistic, dramatic and nearly cinematic music videos to their songs. From the rain-soaked “I’m So Wet”, to the gory “Solid Gold” and abstract “Money”. Pop culture obsessives will quickly notice many references to popular movies or film genres. “Im So Wet” is shot with a blue filter that was famously used in “The Bodyguard” and “Trois Couleurs: Bleu” to create an atmosphere of  overwhelming sadness. “Solid gold” is a nod to the revenge movies  popularized by “Old Boy” and preferred by Tanantino/Rodriguez tag team (“Kill Bill”, “Machete”), while allegoristic “Money” is clearly influenced by David Lunch (“Twin Peaks”) with a flair of 1970’s crime/road movies such as “Vanishing Point”.

As brilliant as this track is, we do not expect “El Dorado” to receive much of an airplay on national radio. At nearly 6 minutes, it is much longer than other songs that currently dominate the airwaves. It is also an experimental composition, merging several genres into one. It needs time to grow on listeners and demands their concentration and focus. This is not a background music material that can quietly play while you read a book or wash the dishes.

But it is good to see that at least one indie band is willing to experiment and look for new sounds. We need eagerness to explore new routes, to take risks, to create something that will shake the indie genre properly and make a mess.

If Avalanche Party want to take the stick and chase the brit-pop nostalgia out of the country, they have our permission to do this. At least we at Vanadian Avenue will be eternally grateful.

The next few months are going to be extremely busy for the Avalanche Party. They are going on headlining tour throughout November and December (playing Actress and Bishop in Birmingham on Saturday, 23rd of November) and their debut album “24 Carat Diamond Trephine” will be released a day earlier on 22nd of November 2019. You can also catch them on Wednesday, the 25th September playing for PRS for Music & Yorkshire Music Forum at the LeadMill in Sheffield, (tickets at http://bit.ly/2yOxxoL), Tickhill T-Fest on 28th of September (tickets at: https://www.t-fest.co.uk/tickets), 20th of October at The Waterfront in Norwich (tickets at: https://bit.ly/2m7kpYD) and at 2Q Festival in Lincoln on 9th of November (tickets at https://bit.ly/2lOnY5V). 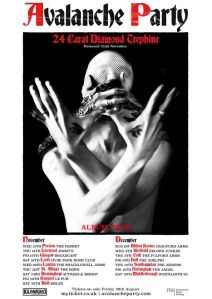 Support your scene (as usual).

P. S. A big big thank you to the wonderful James Holt for his help. You sir, are a wonderful human being!